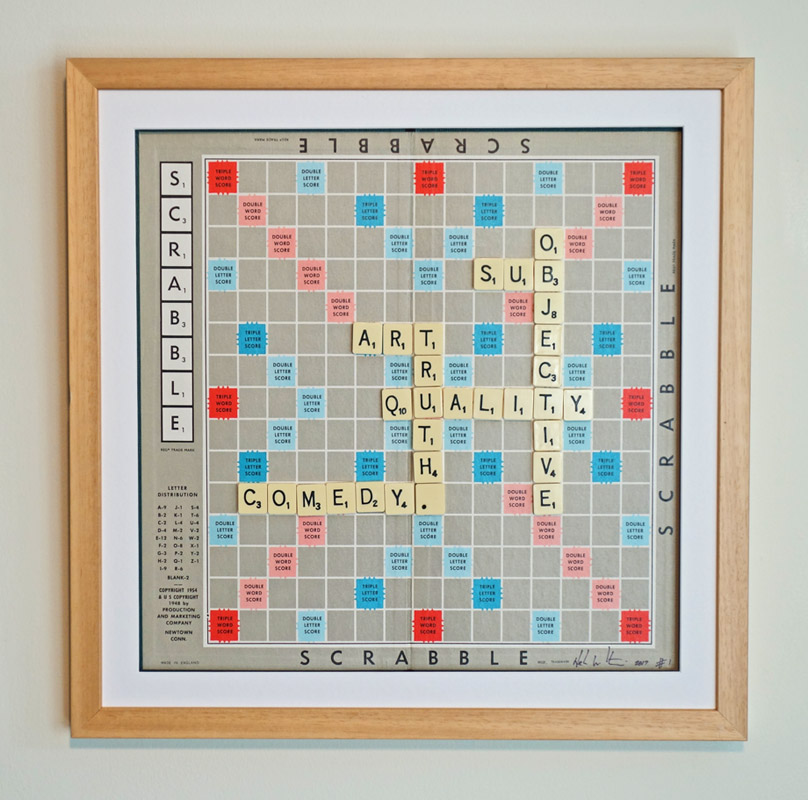 Some items are for sale at my Etsy Shop – NickWarburtonDesigns

I have spent several decades on a very personal quest attempting to understand and define Art, Quality, Comedy and Truth . If you have ever read Robert Pirsig’s ZEN AND THE ART OF MOTORCYCLE MAINTENANCE and pondered his personal search for the definition of quality (that is to say quality on the scale of good / bad as opposed to ‘qualities’ )  then you will understand the difficulties.

This scrabble board may be as near as I will ever get to concisely explaining my thoughts, and in many ways it does so much better than the following words.

For me, Art, Quality and Comedy are terms of divination of truth just like philosophy. The ‘better’ the art then the ‘higher’ its quality, and the funnier the comedy the greater the truth that has been divined and thus the greater ‘resonance’ we feel  … assuming that is that the truth is ‘within our reach’ of it, as we have to understand it in order to appreciate it. This seems to make us all truth seekers in almost all aspects of our own subjective worlds, and maybe the greater the truth the more objective it becomes.

Comedy at its heart is an expression of truth often blended with absurdity. In its simplest spoken form a pun is funny when the two meanings of a word are identified and swapped – this brings about a moment of realisation of a truth and with it maybe laughter. The same pun has less power the second time it is heard as there is a much less pronounced moment of realisation – if any – thus a joke and indeed all comedy gradually loses its power as its truth is absorbed.

Quality is also a search for truth – most people value authenticity over inauthenticity and, for example, an old solid wood table with its aging patina is generally regarded as being of higher quality than an identical looking table with equal engineering properties that is a modern reproduction table – this is because the second table is a fake and therefore it is not authentic. Authenticity and its generated feeling of resonance that we feel is something almost everyone seeks, but we all seek our own individual ‘brand’ of it labelled as our ‘taste’. Therefore quality is subjective, but as more people become more in agreement of the individual quality then the quality seems to move towards the objective.

Art is a search for truth and the expression and communication of it within its own language by the artist for the observer; and the greater the truth that is revealed by the artistic work then the greater its attributed quality. Thus what are considered to be great works of art often reveal great truths – however the world of the arts is also overlaid with the confusing worlds of money and ego which can easily distort and pervert the appreciation and purity of the quality of art.

The word that lies at the heart of all of the above is truth. But what is truth and how can it be identified ? I don’t believe that any truth can be identified except one, and that truth is that ‘truth has no contradiction’. Thus, we can never identify a truth with pure certainty, as it can neither be proved or disproved, but we can however identify a falsity by identifying a contradiction to it; meaning, that to find truth we must actually seek out contradiction in order to reject all that contains it – and what we have left, if we have been thorough, will be truth. 21st century humanity feels adrift in a sea of lies, deception and falsity which in order to persist must crush truth to prevent a contradiction that will lead to what is known as cognitive dissonance – i.e. the psychological  ‘inner manipulation’ of ones reality to reduce disharmony.

Thus, finally, it seems that philosophy and psychology are deeply interwoven as you cannot find truth without being prepared to embrace a new reality and the cognitive dissonance that may occur from the finding of it; and the powers of art, quality and comedy are in their inherent ability to open a window upon a new landscape of truth – we just then need to decide which side of the window we belong on.

Robert M Pirsig – Zen and the art of motorcycle maintenance.

( The full stop on the board is simply there to link the words comedy and truth – it doesn’t have any other significance – it is slightly annoying that I was not able to link all the words without using this tile, and I have not yet found a comedic solution, but this is the best quality resolution. The words are linked by the rules of scrabble, but also with their meanings and definitions.)

I recently enjoyed watching this video by the philosophy professor Gregory B. Sadler which explains Leo Tolstoy’s definition of art which I mostly agree with, but I would like to go a little further and suggest that art exists in the perception of it, either by an observer or by the artists own observation of it – hence an artist does not need an outside audience in order to make art – they can be their own audience. But what is required, is a feeling of resonance within the arts perception. An artist who is producing high quality work will have more resonance in their work than an artist who produces low quality work, and this resonance is an appreciation of a (or some) truth within it – be it aesthetic, philosophical, political, cultural or other. It is because of this resonance that art is subjective, but because of socialisation it can move towards the objective. I think there is also the confusing convention to call paintings art – but not all paintings are art – some are just paintings, and, for sure, not all works of art are paintings. I would also suggest that the intended communication of a work of art, does not have to be the same as its perception of it, in order for it to be art – i.e. the observer can make their own art – it may make it higher quality art if the artists intention is perceived, but I don’t believe that this is a prerequisite of it.